x
Home › Our houses › The Craftsman

April 6, 2016by Christina
We’ve been here for just over a month already, but our new house still feels like somewhat of a college dorm.  We left almost all of our furniture behind at the Victorian to keep the house staged.  So here is our fairly bare new house! I’m so excited that there’s a formal entry, and that the […] 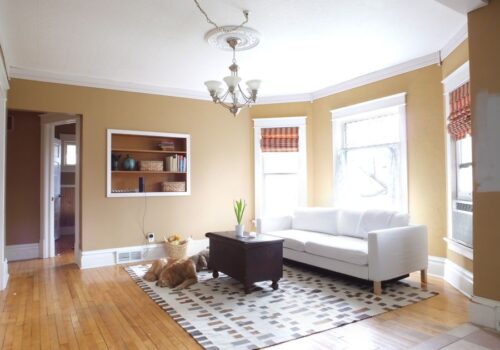 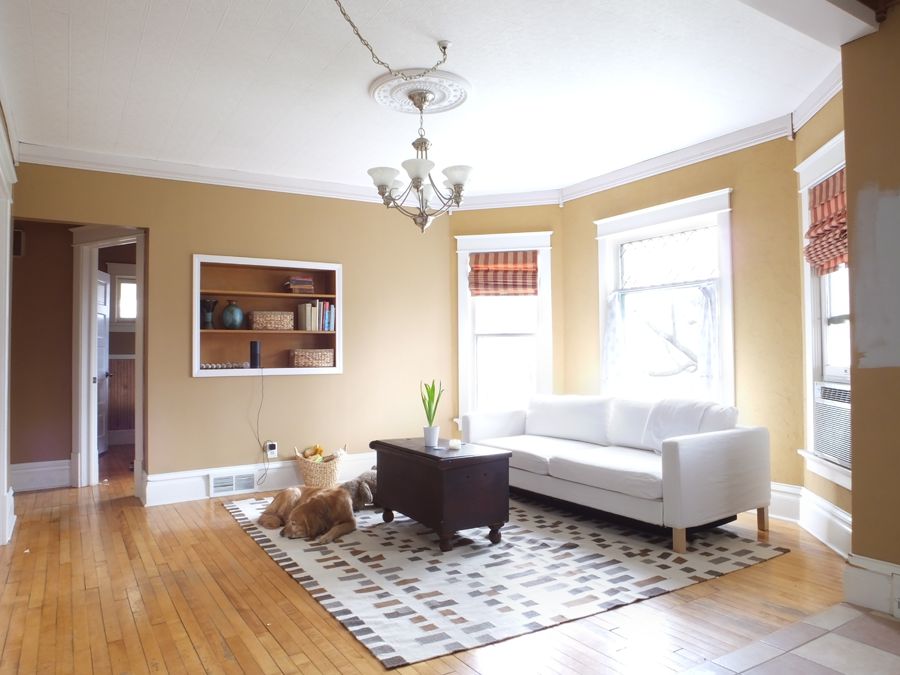 We’ve been here for just over a month already, but our new house still feels like somewhat of a college dorm.  We left almost all of our furniture behind at the Victorian to keep the house staged.  So here is our fairly bare new house!

I’m so excited that there’s a formal entry, and that the house still has all of the original windows with great Craftsman details. 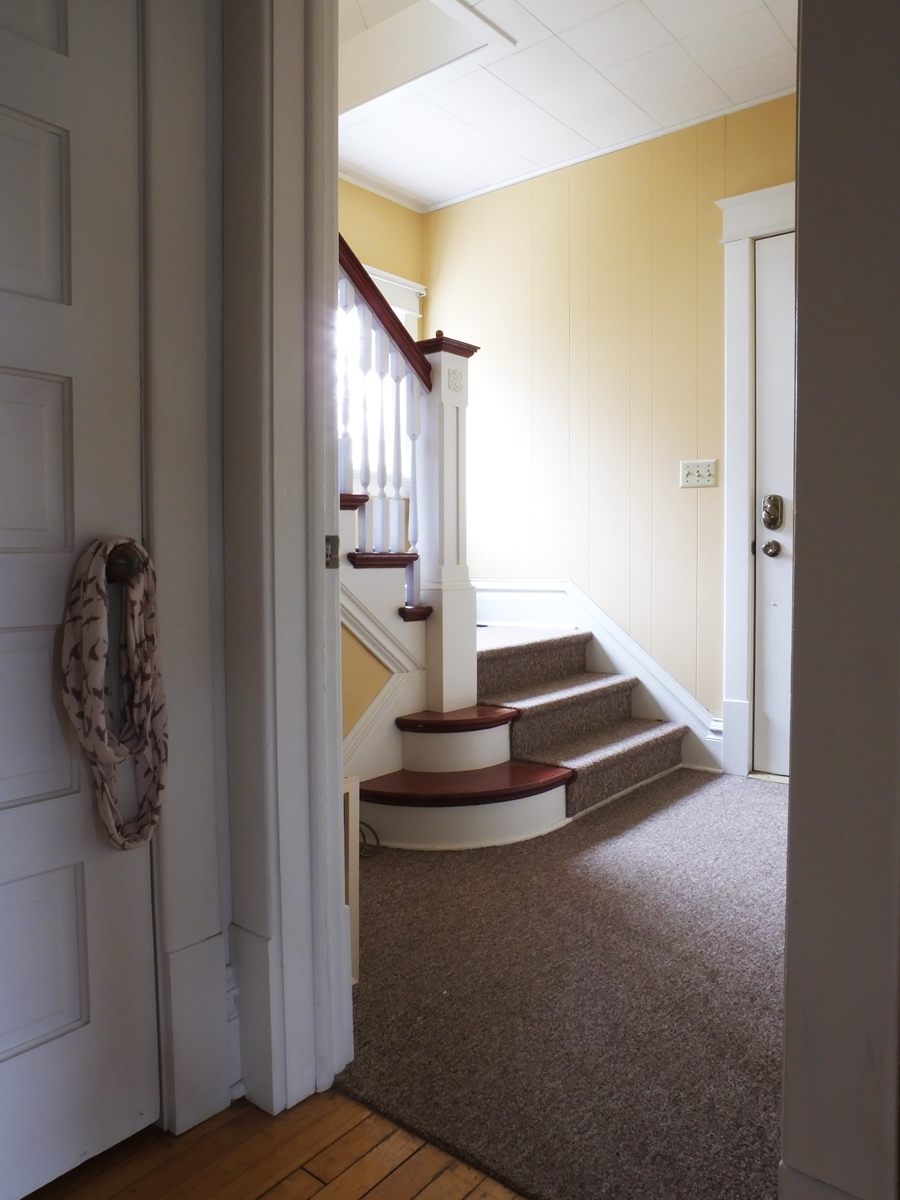 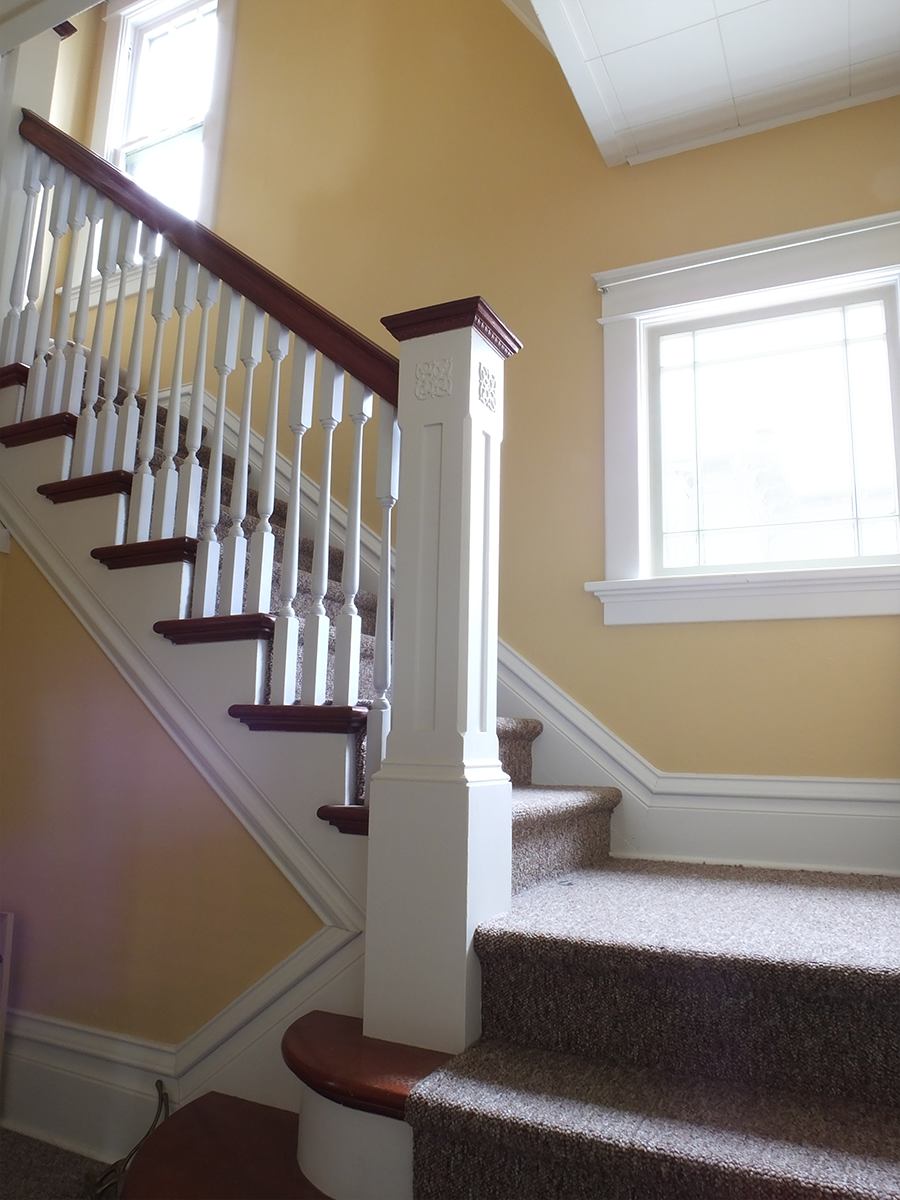 One thing we did bring was the sofa bed that we used to have in the office, so we do have something to sit on.  It’s hard to see it in this pic, but there is leaded glass in a nice geometric pattern in the top of the big window.

The room on the left is the office.  And if you were sitting on the sofa, you’d be looking at the dining room, which is its own room with a giant pocket door.  I forgot to take a picture of it, but you’ll see it soon, I’m sure.  This picture was taken from the kitchen.

As you can see, I was so anxious to get started making it over that I put up paint swatches before taking the “before” photos. 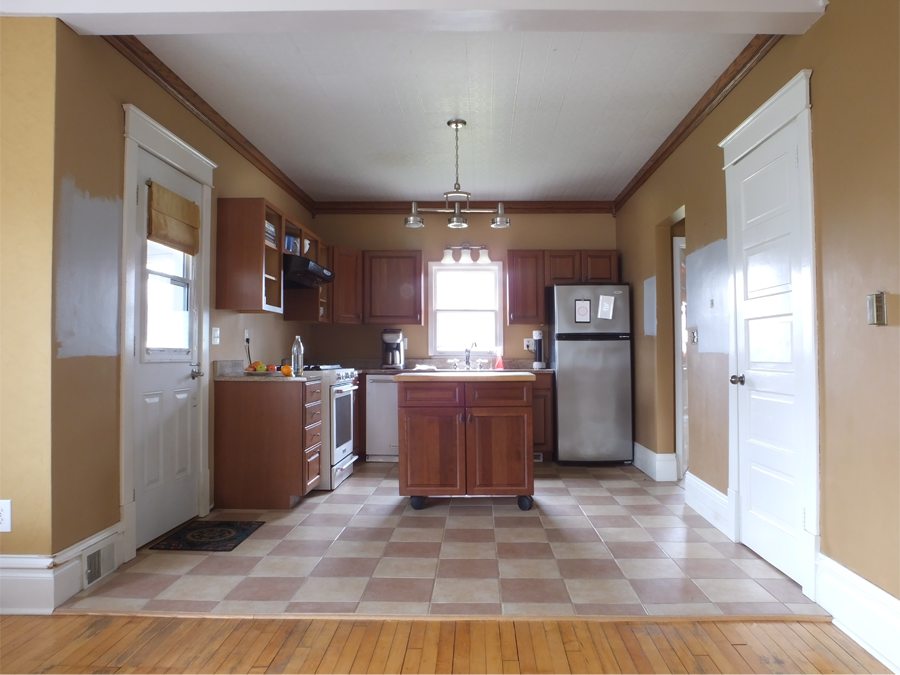 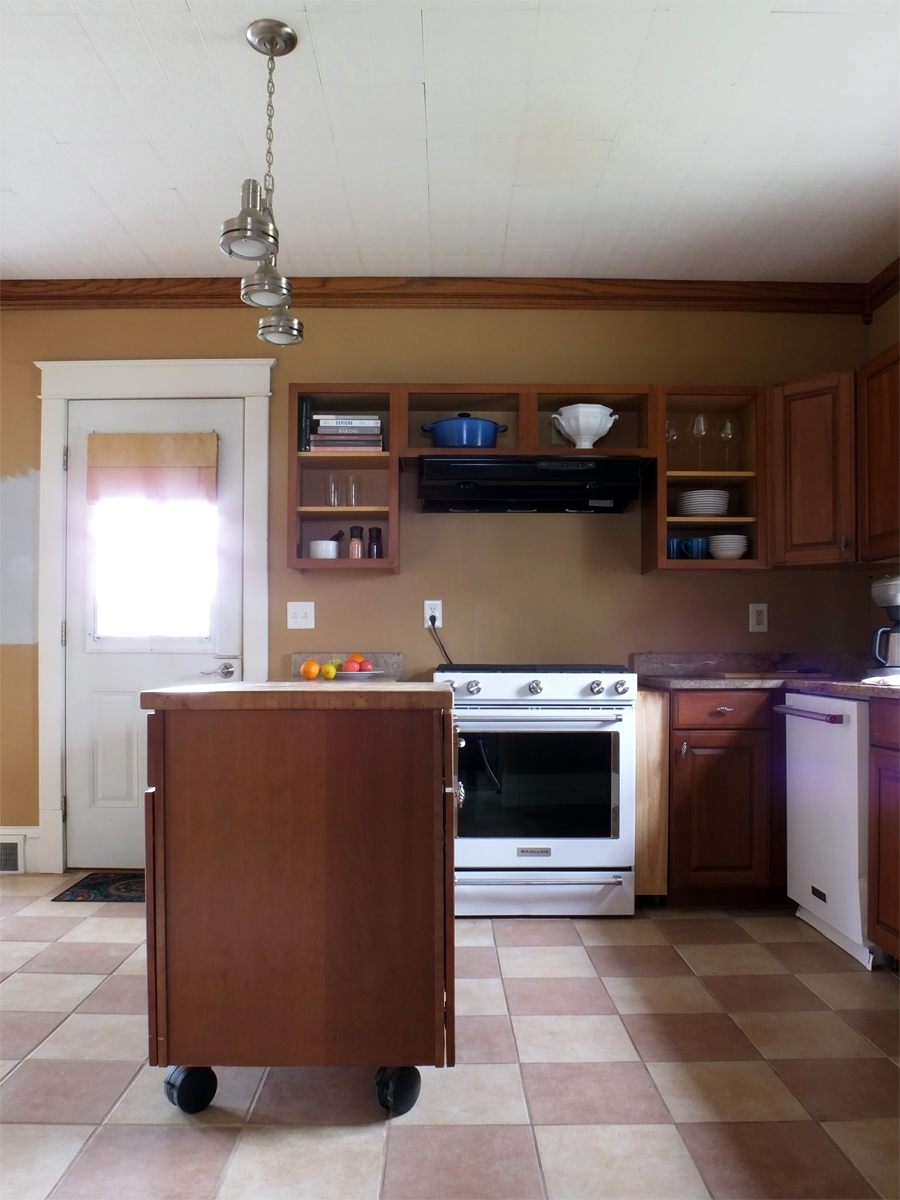 We brought our stove with us and installed the matching dishwasher after moving in because the one that was here was broken.  I miss my kitchen shelves so much, guys.  So I took the doors off the side cabinets to tide me over until we can make more permanent updates.

And here is the office: 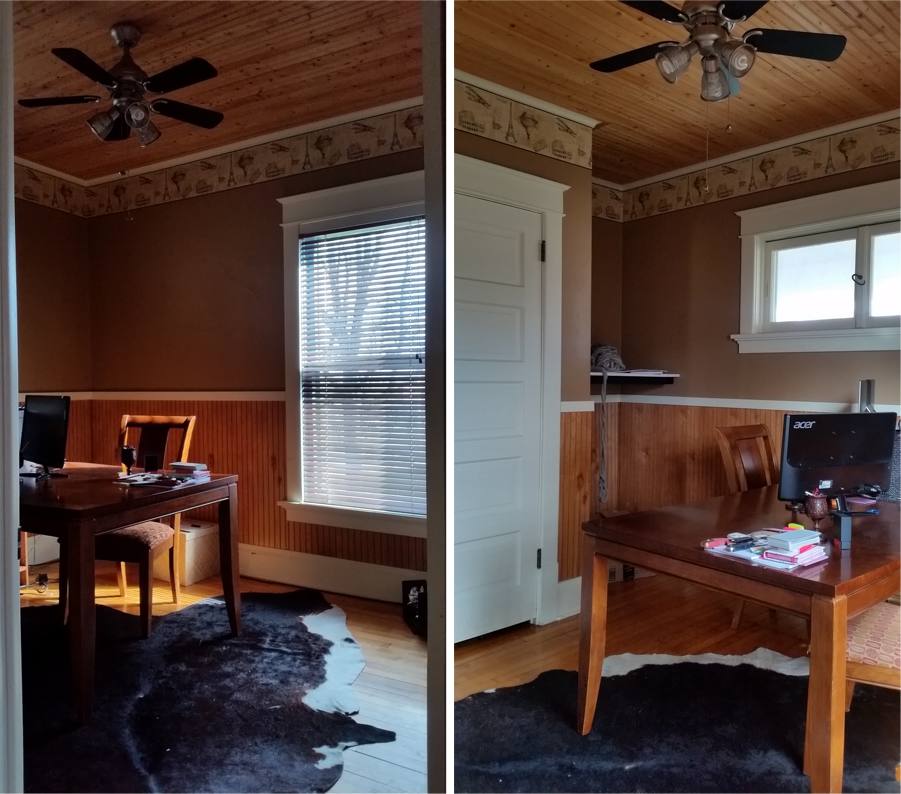 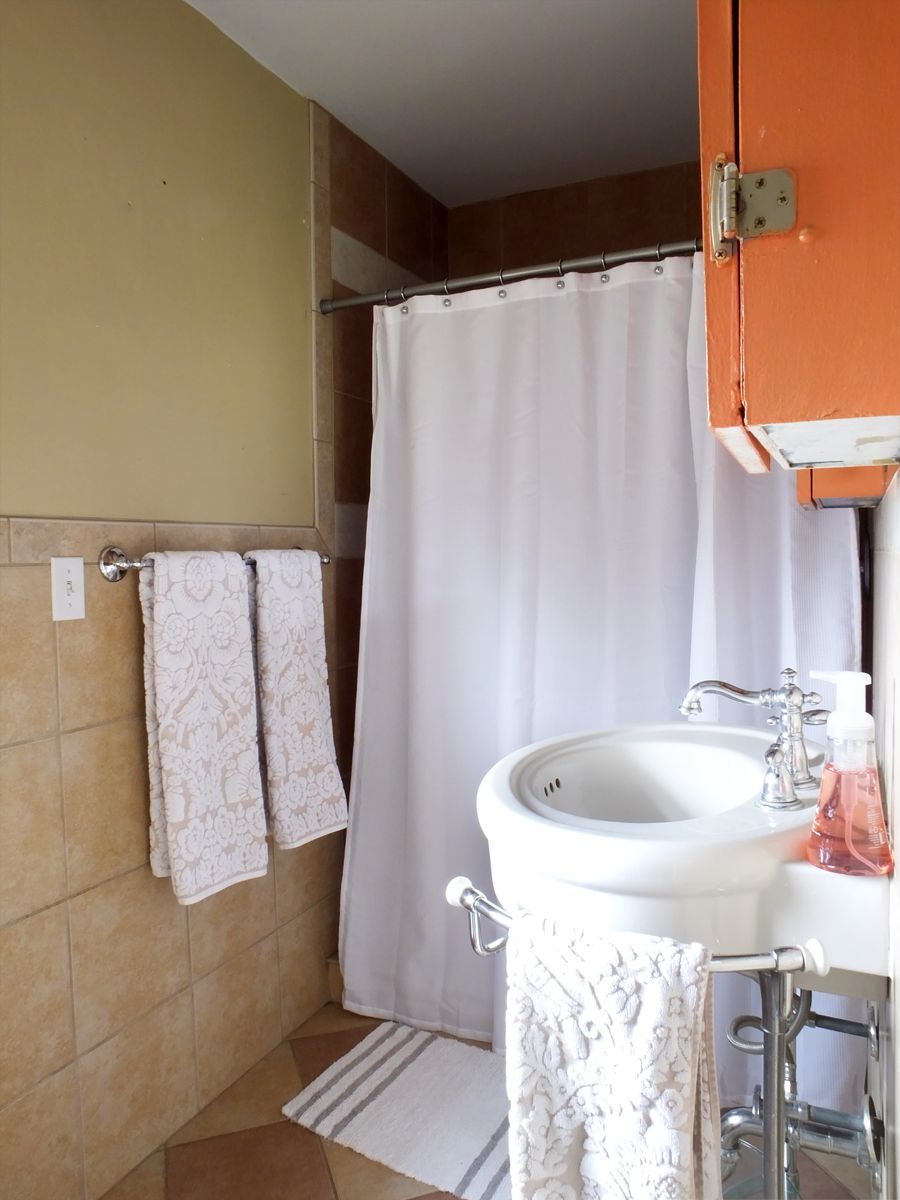 So that’s most of the first floor.  Another cool thing not yet shown (because I forgot to photograph it) is the back staircase.  It’s really steep and wind-y and cool (and also currently completely covered in 1950s laminate).

As I’m sure you know, I have tons of plans.  Tons.  But right now, we’re sticking to simple changes because we haven’t bought the house yet.  The wonderful owners have agreed to rent to us until the Victorian sells.  So until that happens, we can’t get started on the bigger projects we have in mind.

I’m not showing you the second floor until tomorrow because I’ve decided to join in the One Room Challenge and I’ll be giving the main room up there a temporary makeover to make it cozy until the pry bars come out. 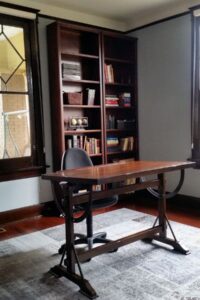 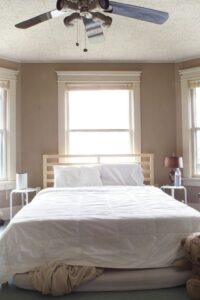 The 2nd floor “Before” photos