A before-and-after (of me this time, not a room)

April 6, 2018by Christina
Tired? Irritable? Foggy? Depressed? No matter how hard you try to lose weight, just keep gaining? Migraines, insomnia, heartburn, or digestive problems, thyroid problems? You might have the same problem I had. (Yes, for me those were all symptoms of one singular problem.) I’m getting personal today.  This is something I’ve mentioned on social media […] 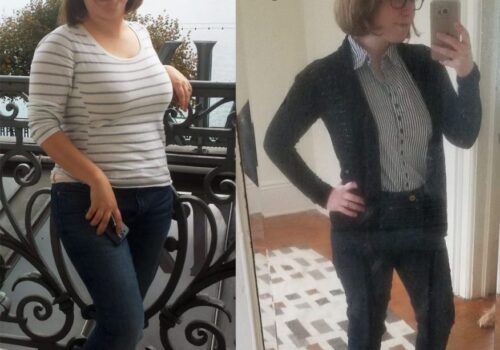 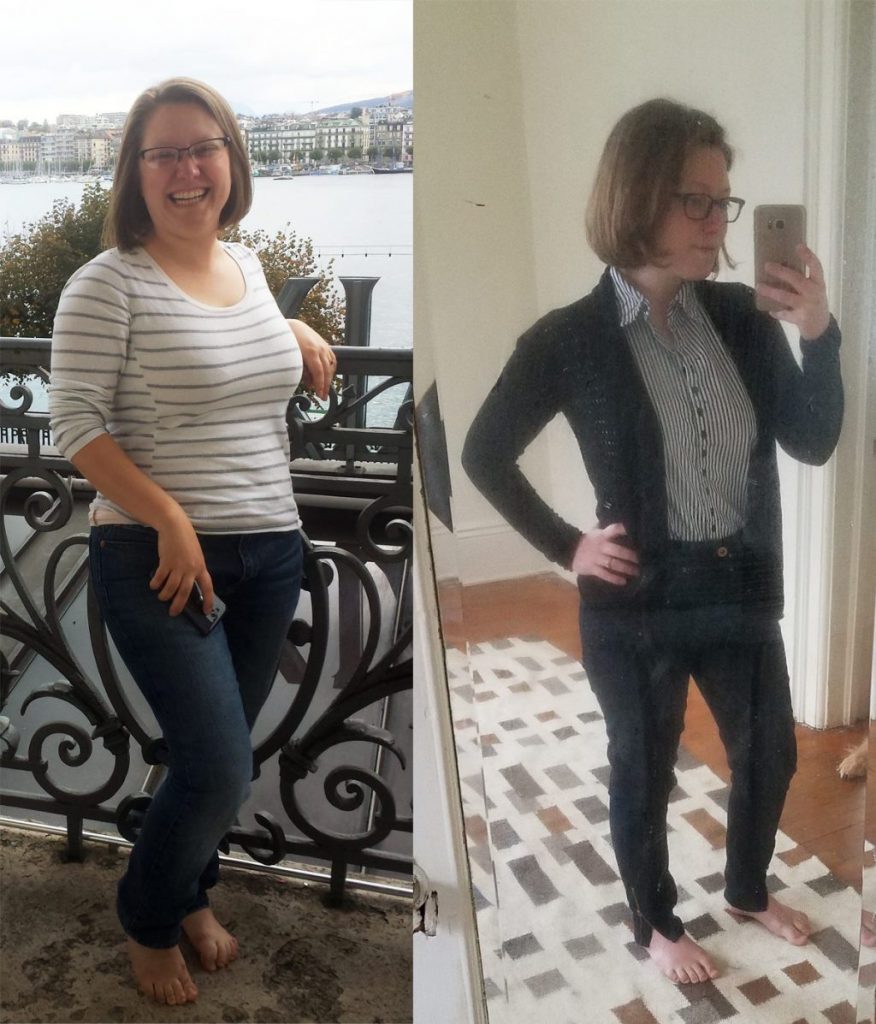 You might have the same problem I had. (Yes, for me those were all symptoms of one singular problem.)

I’m getting personal today.  This is something I’ve mentioned on social media a couple times and both times, I got piles of direct messages asking for more info, so I’m sharing here in case it can help more than my very few social followers.  Here’s a relatively brief version of my story:

About 10 years ago, I started putting on a little weight. It was just a couple pounds, but a couple pounds is pretty noticeable when you are only 5 feet tall and very small-framed. I assumed I was eating too much, so I cut back on my portions. 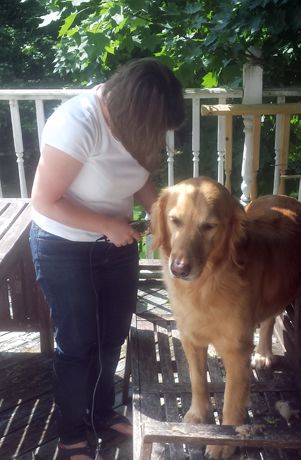 Over the next few years the pounds kept adding up, and I just thought I wasn’t trying hard enough.

After 5 years of counting calories, eating more and more vegetables and less of anything else and STILL steadily gaining, I started feeling desperate and angry about it. I cut back to 1,200 daily calories before 30-60 minutes of cardio and/or strength training. After a few weeks, I had lost ONE pound. So I cut back some more. Until I was down to 900 calories a day. One more pound came off. And when I couldn’t take being starving anymore and went back up to a whopping 1,200 calories, I gained 5 pounds.

And no matter how much I ate or didn’t eat, I was always hungry.

On-and-off I just didn’t care and ate what I wanted because it didn’t seem to matter anyway.

It has plagued me since my teens. Not just an “it’s-hard-to-fall-asleep-within-30-minutes” insomnia…it was “only-sleeping-for-about-an-hour-at-a-time-and-getting-4-hours-on-average-EVERY-NIGHT” insomnia. (That was hard to type with all those dashes.)

I am a happy person, the Hubs and I are the goofiest of goofballs together. In fact, it was hard to find “before” pictures to share here, because in 90% of the very few photos there are of me, I’m making weird faces or doing something crazy.

That’s why the depression was extra baffling. I didn’t even realize it was depression until one morning I actually woke up happy like I used to. It felt so weird. It felt like the sun was shining for the first time in years and I was myself. And then it made me really sad to not understand why it was happening, and to know that any minute, that sunshine-feeling would go away, completely unrelated to anything that was actually happening in my life. And it would be another 6 years until I would learn why.

Migraines became quite frequent, at one point, even a few times a week. And if you are a migraine sufferer, you know that it’s usually an all-day deal. A few of those days, I actually just had to skip out on all activity and curl up in a ball on the sofa until the evening (which made workaholic-me pretty irritable). Even the thought of food or moving made me sick to my stomach.

A bowl of spring greens with some lemon juice squeezed on top was a normal lunch for me. It was also normal for me to very suddenly look 6 months pregnant (QUITE literally) and feel horrible in every way very shortly after each meal. When one day, I didn’t have a salad and none of that happened, it made me wonder…

I stopped eating leafy greens. That’s when the weight loss started. 5 pounds in the first week to be exact. And I started sleeping for more than an hour at a time.

There were LOTS of other veggies that were literally painful for me to eat, but I thought we were just supposed to suffer through the pain because veggies are the healthy food, right?! And I was always told that if it caused pain, it was because I wasn’t eating enough of them, that if I ate more, my body would produce the enzymes needed to digest them. Well, I stopped eating the ones that caused immediate cramping, bloating, and fatigue. And I felt better than I had in years.

An acquaintance told us that he had a bunch of the symptoms I mentioned at the beginning of the post, and his doctor recommended a food allergy test. He was no longer supposed to have gluten, or sugar, or several other things.

We went home, and I said to the Hubs:

I can’t even imagine…I am SO glad we don’t have food allergies. That would be so miserable!

What a dork I am. I don’t know how long it took for the realization to sink in that HE LISTED ALL MY SYMPTOMS too, but shortly after that, I got a food allergy test myself.

The results were very upsetting. It didn’t seem like it was possible to cut out all that food. The Hubs and I decided it would be best to cut things out slowly, one or two foods at a time. So we planned a several-month phase-out of foods, finishing with the hardest: gluten. On the left is me towards the end of the phase-out plan, feeling much better already, and many pounds lighter. On the right is me this morning, 3.5 years later. 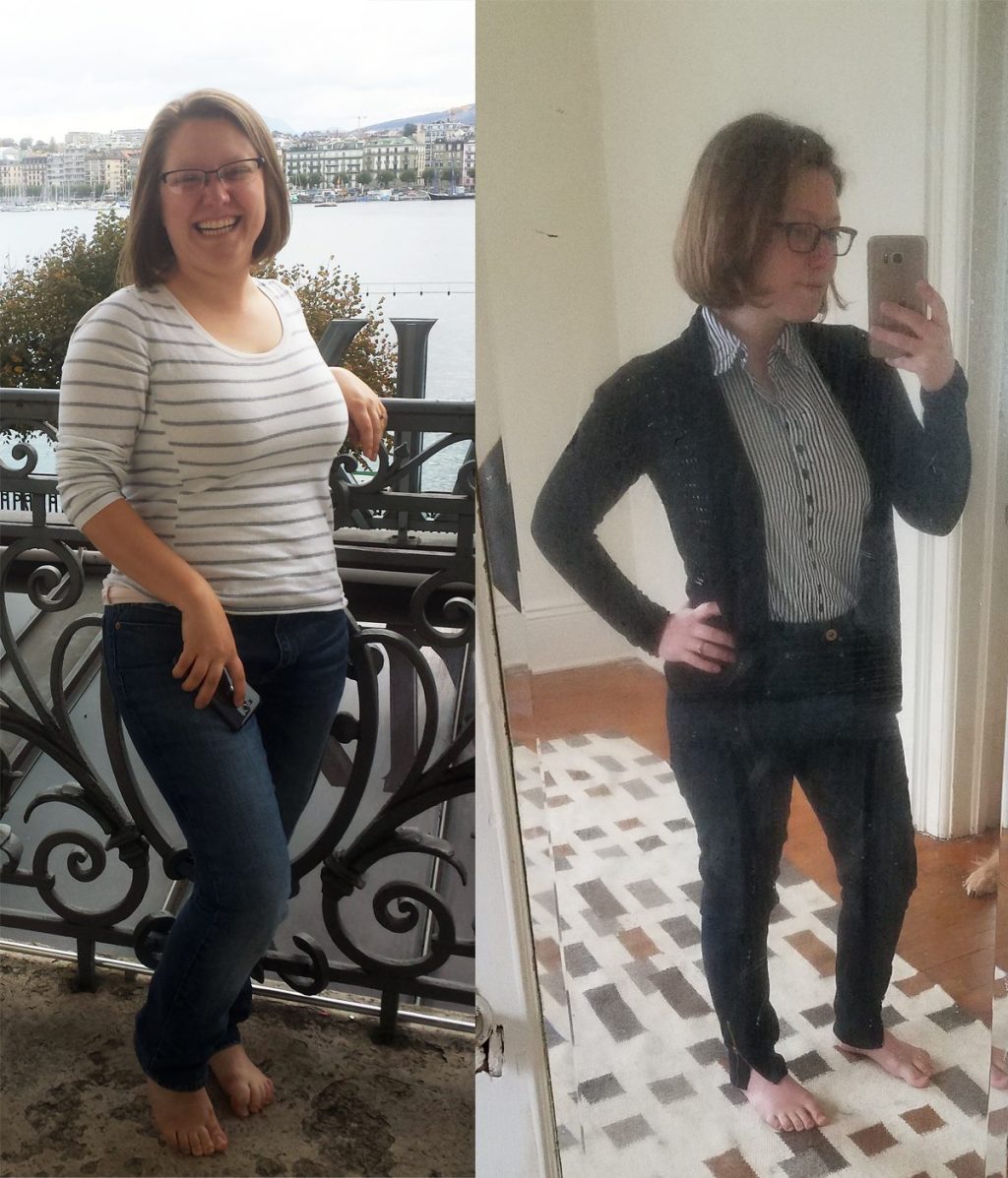 Can you tell how much I like shoes? 😀 And the mirror isn’t dirty, it’s just vintage.

On the right, I’m EATING MORE and exercising less. I’m just not eating things I’m allergic to. Literally the only difference. This was zero-work weight-loss.

I have no clue how many calories I eat anymore, I just eat until I’ve had enough food, and then I’m not hungry again until the next meal time.

Should you get tested?

If you have these symptoms, you might want to! I see so many people suffering with these symptoms and not knowing why. It is really hard to not offer unsolicited advice individually. (So apparently I wanted to offer it en masse instead. 🙂 )

If you do, you’ll get your results, and it might feel like the end of the world. Trust me, it is NOT the end of the world. It will be hard, but only at first. You’ll crave things you can’t have for a little while, but that goes away. Once you’re used to it, it’s a non-issue…you don’t even think about it anymore.

Life is more than food.

My blood test was a few hundred dollars. And it was worth every penny to change life so dramatically.

It’s important to note that this was a blood test for IgG4 allergies, not a sensitivity test, and no unproven test methods. I did have some family members get allergy tests with…unique methods instead of blood (or even with blood, but not testing for IgG4), and the results were pretty inaccurate. Sensitivity tests are available as well but in my opinion, those are easy to figure out on your own, the reaction is much quicker and usually involving digestive problems right after eating them. Allergy symptoms, because they are an immune system response, may not show up for up to 3 days, so self testing (known as elimination diets) can be very long and frustrating.

Know what I had for breakfast this morning? Ice cream. Real milk, real sugar, peanut butter swirl chocolate ice cream. (No dairy allergies here, obviously.) I’m totally not recommending ice cream for breakfast, we’re just low on groceries and it sounded good. My point is: I’m not starving, I don’t feel restricted, I can have a treat for breakfast if I feel like it and not be afraid of gaining weight. I’m not afraid of food anymore. 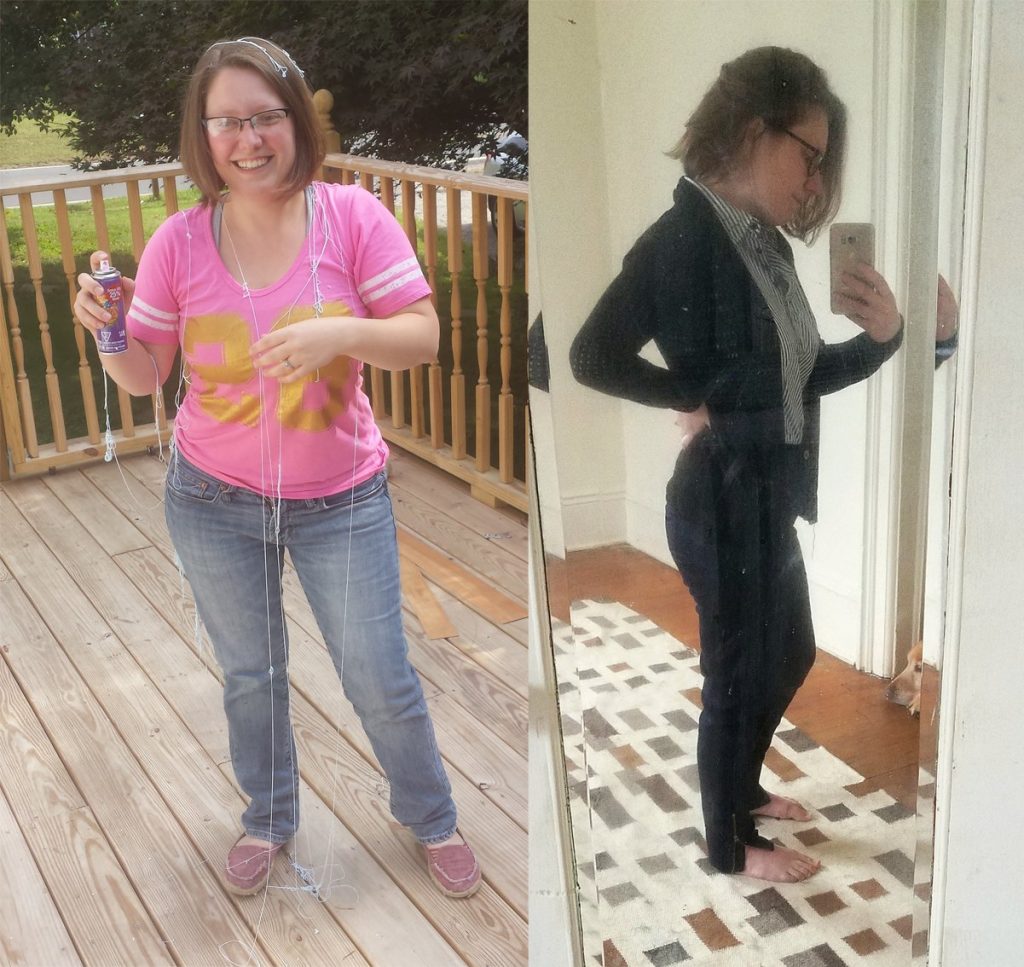 Yeah…that’s silly string. Told you I had a hard time finding non-goofball pictures. 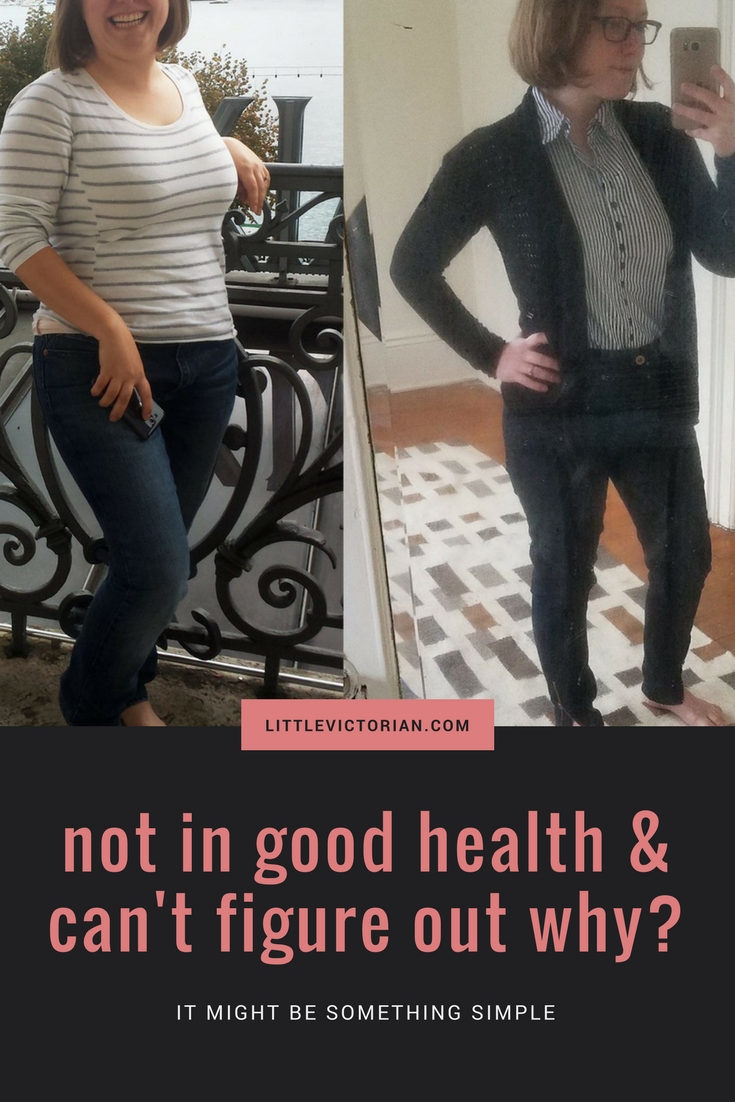 All the symptoms: the migraines, insomnia, stomach aches, weight gain, thyroid problems, depression, irritability, fogginess, etc all went away when I stopped eating things I was allergic to. It’s so, so worth it.

And just for the record…it had nothing to do with organic vs. conventional or GMO food. I grew up on organic food (even from our own back yard) and as long as we could afford it, that was all we ever purchased ourselves. It’s just an individual matter. One man’s meat is another man’s poison. If you have problems, you might want to get tested and see what your poison is. 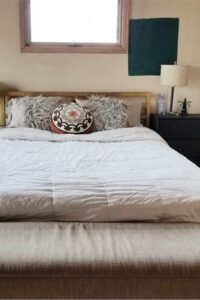 Want to get paid to play with puppies? 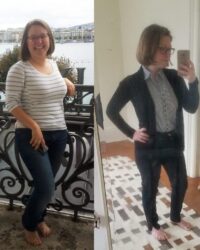 A before-and-after (of me this time, not a room)